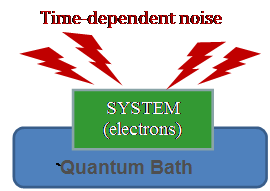 Pure non-equilibrium phenomena are generically hard to observe in solid-state devices. This is mainly due to the large mass of the atoms (with respect to the electrons). The atoms can easily absorb the energy of the electrons in the form of low-energy phonons. Thus, the atoms effectively behave as an energy sink for the electrons and rapidly restore thermal equilibrium.

In this publication, we studied the effects of strong external, time-dependent noise, which can drive the system out of equilibrium. We found that, under specific circumstances, the interplay between the noise and a thermal bath can give rise to a new type of universal behavior, termed “non-equilibrium quantum criticality”.

Alternatively, non-equilibrium effects can be observed if the system is probed very rapidly. This is now possible with the aid of ultra-short laser pulses. For example, see this experiment, measuring the dynamical response of a high-temperature superconducting cuprate. The measured signal showed a combination of decaying and oscillating signals, which were interpreted as signatures of a competing pseudogap . We are currently analyzing alternative interpretations, along the lines of our recent paper on the relation between competing order and Friedel oscillations in cuprates.