Modern technology often requires the precise measurement of times and frequencies. One possible way to realize very precise atomic clocks utilizes ensembles of atoms whose collective spin is “squeezed” beyond the standard limit. Unfortunately, spin-squeezed states require a high degree of quantum entanglement and are easily destroyed by the dissipative coupling to the surrounding environment. For example, the spontaneous emission of photons from the atoms reduces the amount of entanglement and, consequently, limits the precision of the clock. 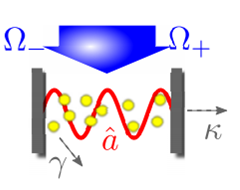 We proposed a new method to create spin-squeezed states by collectively coupling two internal states of the atoms to a driven photonic resonator (“cavity”). When a photon escapes the cavity, the atomic states re-arrange themselves and, at long times, the system tends towards a strongly-correlated “dark state’’. For specific values of the atom-cavity coupling, the dark state holds a high degree of spin squeezing (see Figure). Counter-intuitively, the dissipative process of cavity decay becomes a resource for entanglement.

In practice, however, the cavity decay is not the only source of dissipation. The atoms can emit photons that are not aligned with the resonator as well. This process involves the flip of a single spin and reduces the atomic entanglement, leading to a reduction of the clock precision. The competition between cavity decay and spontaneous emission drives the atoms to a mixed state with reduced, but finite, amount of spin squeezing. For realistic situations, the proposed method should allow to improve the precision of the current state-of-the-art atomic clocks by one order of magnitude.